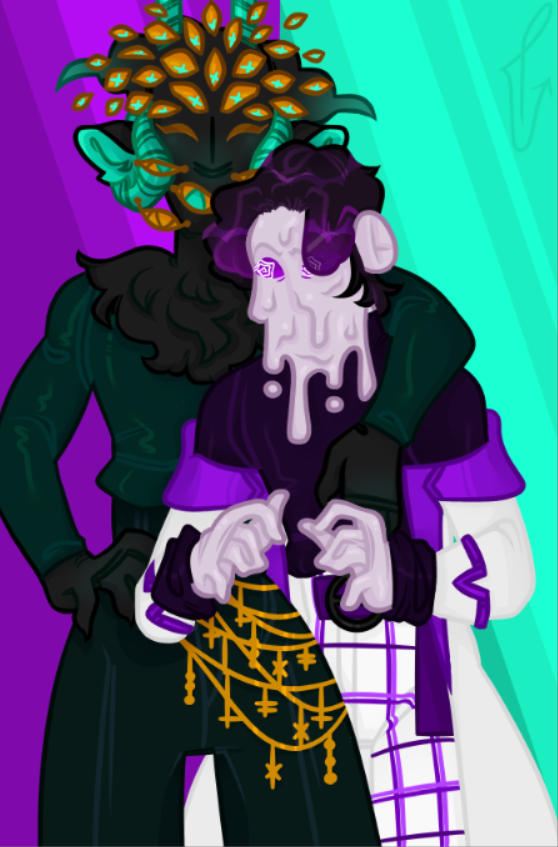 Here's The Boss and...a character you haven't seen! Yet. You may notice that The Boss looks a little different, that's 'cause
this is a design relevent to 'before' the inspector came along! In anycase, this new fellow will be looking different in
the upcoming chapter, but he'll still be tinted the same purple, so he's plenty recognizable! In other news I've decided that
I'll be stepping back from more 'date' driven deadlines and instead try balancing all my various hobbies more healthily so
I still feel productive! ('Cause, honestly, that's all the dates were there for.) So I'm thinking, everytime I finish sprites,
writing scripts, coding a large chunk of the upcoming story etc. etc. I'll set aside some interum time to draw so I dont grow
burnt out or anything! Not that I'm exhausted of the project or anything, quite the opposite I always find myself enjoying
this procress, but I'm catching early signs of burnout in myself, (producing less unrelated art to the main proj., no
motivation, etc. etc.) So, I'm glad I'm catching it early instead of crashing and, well, burning! I think a good sign is I love
still drawing these characters, so I'm infinitely relieved! In more exciting WILTH related news however, I'm going to start
coding the next chapter, like...right after I finish this post. So expect it out in the next two-ish weeks (or don't, considering
my record with deadlines...) Anyways..! apologies for the long post! 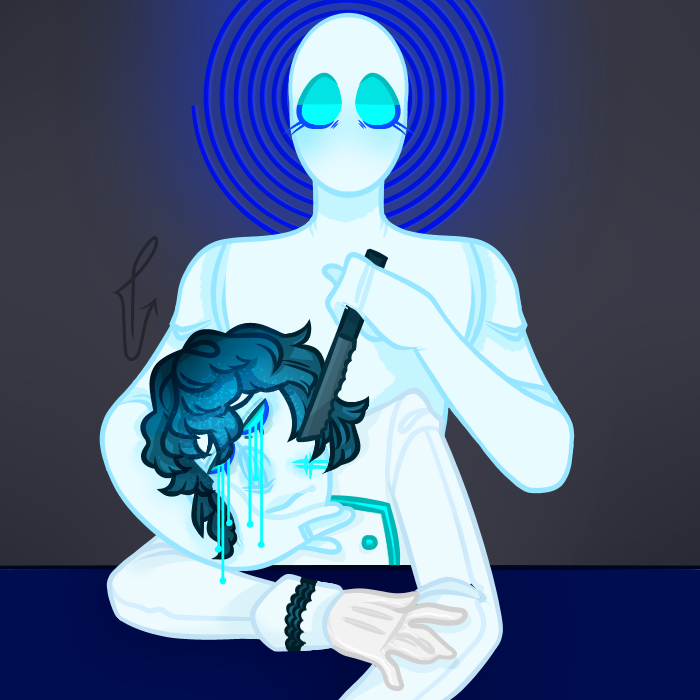 Jeez! finally once again some formal WITLH art! Don't worry I'm working on sprites right now. I was hoping to get all
said and done by wednesday of next week but do to intenet related... issues it looks like thats a little out of the question.
I'll try my best to meet my holly jolly deadline though, my word! In other news thank you to all the new visitors! On an
unrelated note I've been considering a bit of an aesthetic shift but...it feels a liiittle too early since the last one y'know? In
any case!! Sorry for all these unrelated rambles! I agknowledge the drawing may be a little worrying for people following but
all will be explained! (later rather than sooner unfortunately.) Oh! And before I forget I tried some new things out with
lineart and coloring in this piece I thought looked very nice, I was excited to share! anyways I'm going to stop myself from
rambling now! Until I crank some art out again I guess! 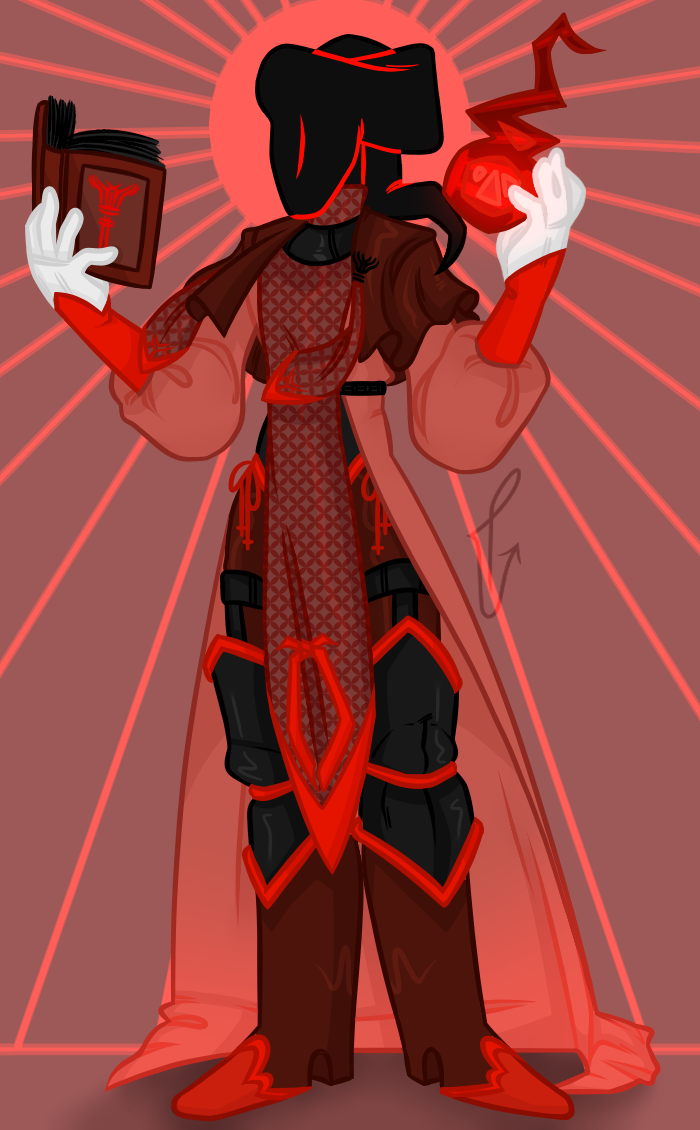 Hey all! I'm so sorry for my complete and utter 'offness' when it came to the deadline. Deadlines kicked me when I was
down around Thanksgiving so I took the chance to instead just recharge my own battery. (I guess knocking on wood did
nothing.) However, here's some art thats been sitting on my sketch list waiting to be finished since October! It's actually
kinda a weird story! So basically, he's a character from a table-top I play (he sucks!! he's the worst!!) but he usually
dresses in suits and has a more corporate aesthetic. (The society he comes from is pretty hyper-capitalist.) So, anyway, since
he's a war cleric It's kinda been commented on that he doesn't really dress like one in the traditional 'fantasy' sense. (The
setting is weird by the way, he's considered an 'alien' to the more traditional fantasy setting races.) And, anyways, after I
started drawing this the design got implemented into the game but I had been working on WITLH too much to be timely, nuts!
In anycase here's an (untimely) Lorien Grangere! 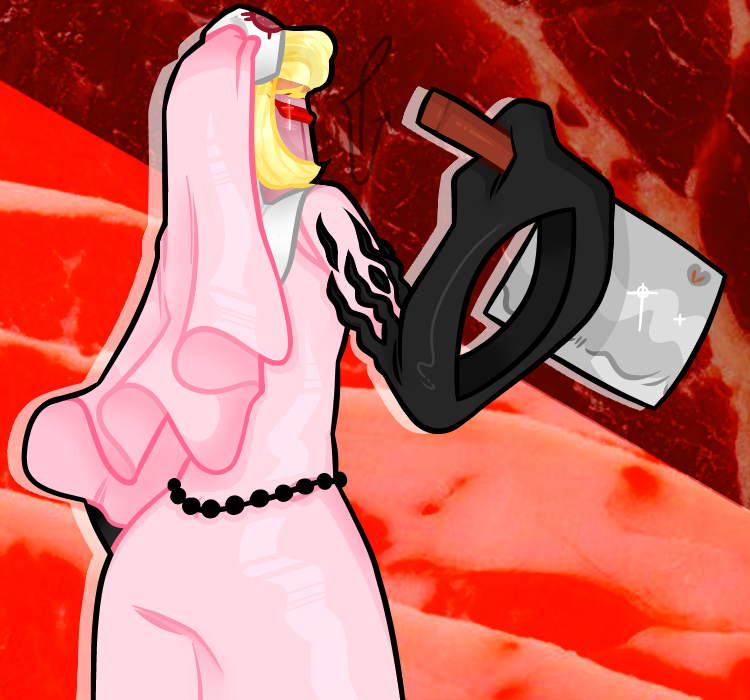 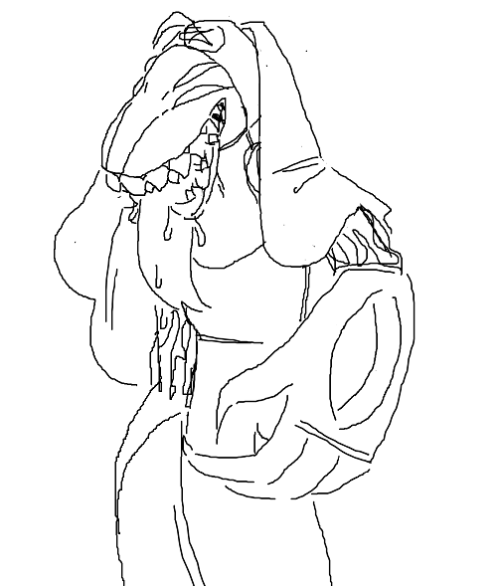 Whew! Sorry for not posting here a while, trust me I miss drawing! My focus is primarily on the next chapter of WITLH
right now, and i'm hoping to release that on the 23rd if all goes well (may be very minimally pushed back to the 24th)
but knock on wood! This character is The Host. I'm a sucker for 'religious' aesthetics and monsters and she is kinda a mix of
those. She's actually made out of wax, and if you touch those arms of hers you start to dissolve, spooky! I also attatched a
tiny little halloween doodle of her face 'open.' (these are both old, but I have a backlog... felt guilty for not updating this part
of the site in so long...) But hey! I have many drawing plans! Can't wait to show the results! 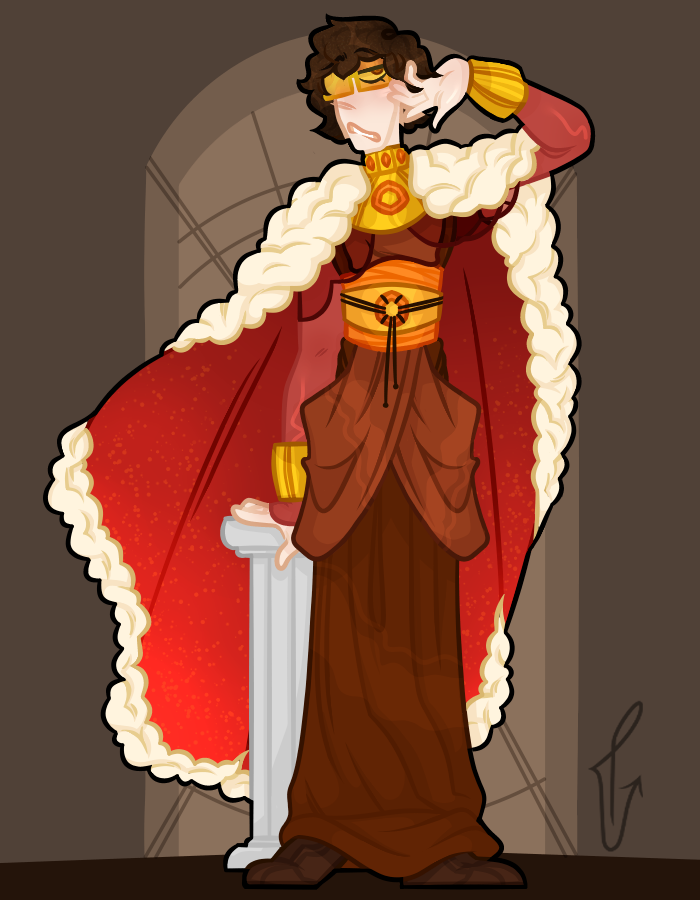 Here's a character from a campaign I'm running with a friend of mine! The setting is based on The Library of Babel
and the characters are chasing after certain books. This is who we call the 'book pope' he's not as mean/apathetic as he
looks here haha, actually generally pretty nice, but I thought the pose was fun and I wanted to try it. Bonus fact! He also
has trouble walking by himself, and generally has a staff with him, but was (accidentally not really long story) kidnapped
by the party and so generally had someone as an emergancy support beam at all times. Anyways, he's the pope with shades!!!